Dr. Figueroa Tames a Beast of a Case with EdgeFile®

“I haven’t received any endorsement…but this is the only file that could tackle that case.”

The following case study was transcribed from a Skype interview and republished with permission from Dr. Yanina Figueroa.

A Passion for Endodontics

When colleagues ask her why she decided on Endodontics as a specialty, she responds, “I love the challenge, every person and tooth is different.  There is never a dull moment just a dull bur!”

Dr. Yanina Figueroa’s sense of humor is as sharp as her skills. We understood that after only a few minutes of talking with her. 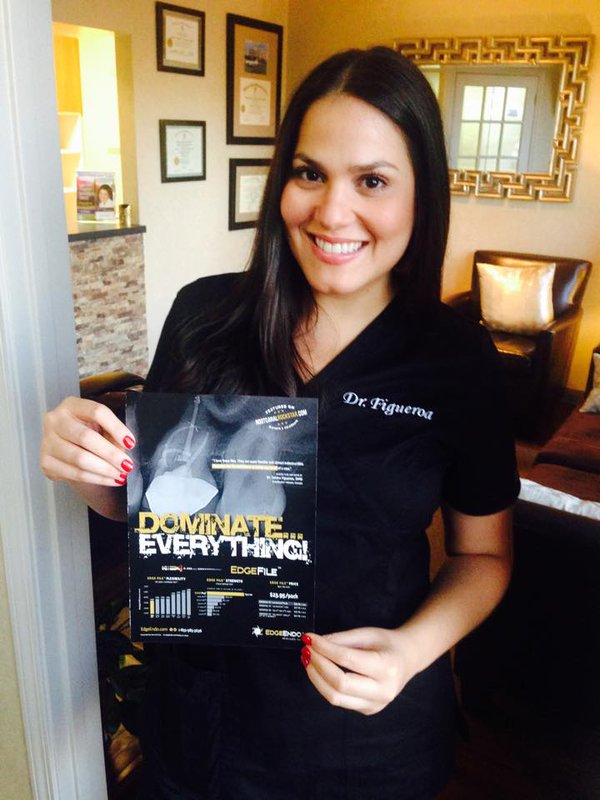 We met her when we connected with her on our EdgeEndo® Facebook page. In her constant quest to find the newest and best instruments to tackle her challenging cases, Dr. Figueroa was one of the “early adopters” of the heat-treated EdgeFile®. She is such a fan that she and her “Beastly” case were featured in an EdgeEndo® advertising campaign.

I’m an endodontist from Atlanta, Georgia, and I did my specialty at the University of Pennsylvania, graduated 2013 and I wanted to share with you this case of a molar number 14 of a 33 year old patient with irreversible pulpitis and Symptomatic Apical Periodontitis. This case was diagnosed and accessed through the crown using diamond burrs. Then, irrigation with sodium hypochlorite. 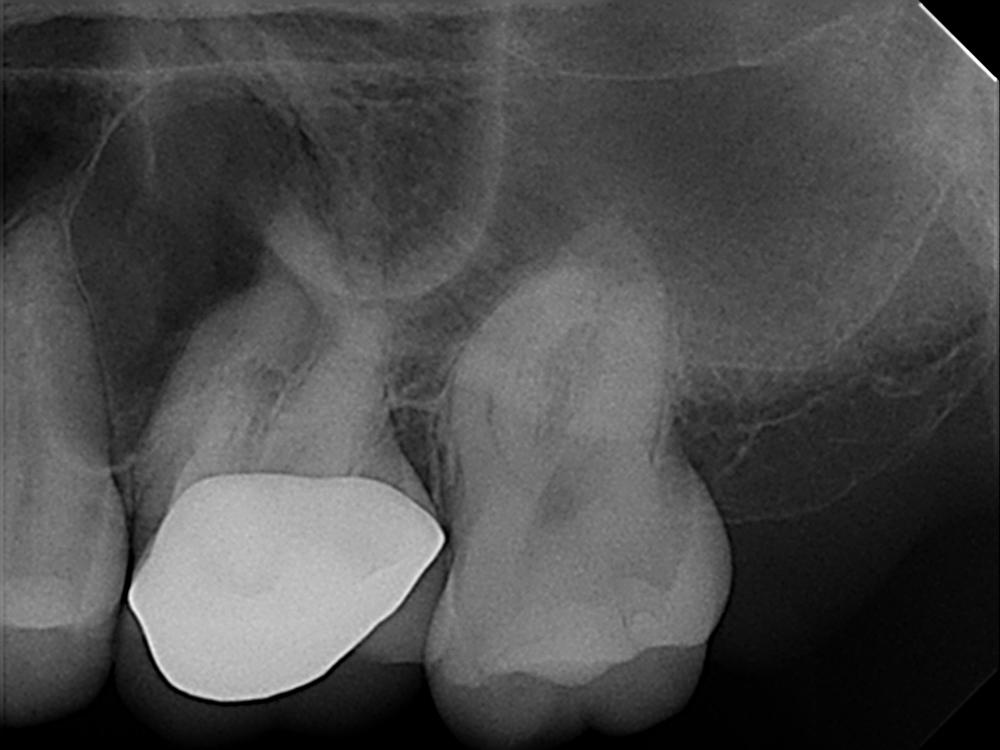 “When you see a case like this, you’re wondering to yourself, what file am I going to use for this? How am I going to negotiate that canal without having file breakage?”

First, I tried to get patency of the canals, I did the patency of the distal mesiobuccal canal and distal canal using 10 files, and then worked my way up to a 15 file. I instrumented this case using an SX file to open the orifices, then used copious irrigation with sodium hypochlorite.

I started using the EdgeEndo files utilizing crown down technique, when you see these type of canals that are very curved, you want to flare up a little bit the upper portion of the canal, so your files can slide down easier and have less binding on the walls. I started doing the crown down from a 40 to a 25 and then went all the way to 40’s on the mesiobuccal, on the distal, and I did the palatal to a 45.

I went to a 40 on that root… any other file would have just broken and just could have been impossible to retrieve.

When I took the x-ray to see how the cones were fitting, I noticed that there was a canal missing, so I used the CBCT to find the MB2 canal. All this, of course, while I’m using my EdgeFiles, I used also lube, RC prep for the instrumentation, and I also used a lot of sodium hypochlorite to instrument. Before doing the cone fit, I do irrigation with ultrasonics using sodium hypochlorite , EDTA, and chlorhexidine. I did my cone fit with the Edge Gutta Percha and the AH Plus sealant.

When I took the x-ray to see how the cones were fitting, I noticed that there was a canal missing…

Now, I can tell you when I took the x-ray I saw that the MB2 was missing, so I took a CT scan and noticed the MB2 and noticed the weird unusual buccal inclination of the MB2 to the palate, and the MB  really pointing towards the buccal. It looked almost like a snake tongue. I was like, oh wow, this has been the thing that I was looking for. I found the MB2 on the second visit. I closed everything up before that with calcium hydroxide, then on the second visit I found MB2.

I proceeded to do the instrumentation up to a 35 on MB2 with the same sequence, using sodium hypochlorite, first of all going up to a number size 15 and doing crown down to a 35. After that, I irrigated everything with sodium hypochlorite, EDTA, chlorhexidine, and I dried everything up with sterile paper points, and took an x-ray with the cone fitting, with cones and age plus sealant. 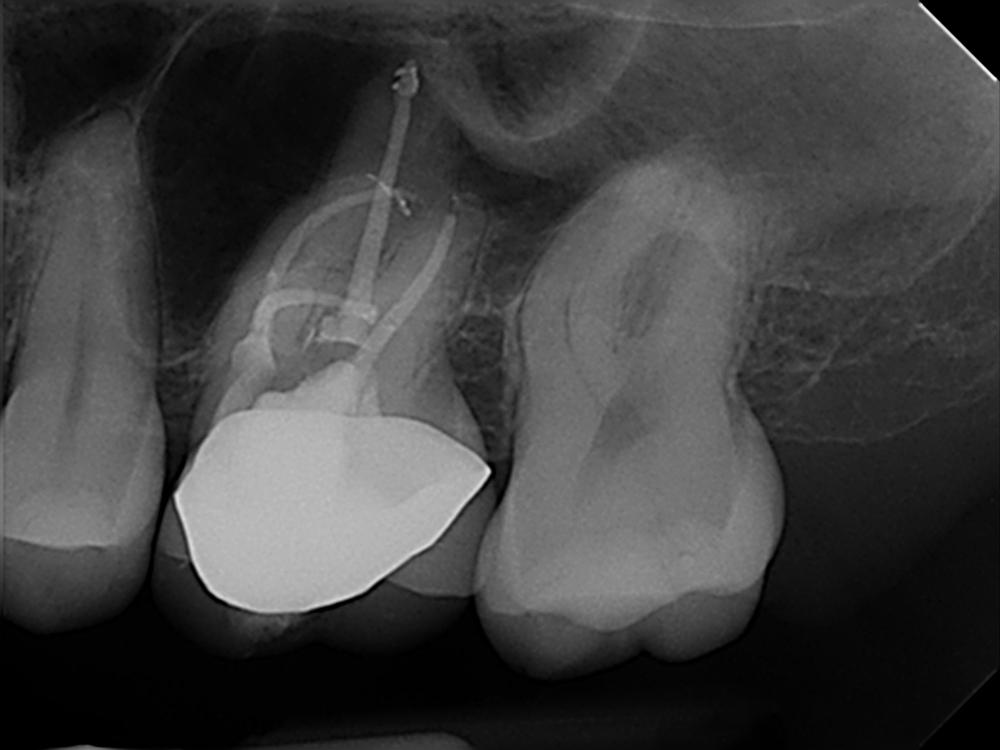 “I haven’t received any endorsement…but this is the only file that could tackle that case.”

After verifying that the diagnostic intermediate x-ray looks fine, I closed everything up using vertical condensation, just leaving 4 millimeters of the apical portion of the cone, and then back filling with Edge Gutta Percha. After that, very important, I always put an orifice barrier. I use purple permaflow orifice barrier, then I put a cotton pellet and that was that.

I was trained at U Penn and we believe in large apical sizes and I went to a 40 on that root… any other file would have just broken and just could have been impossible to retrieve. When I did this case I was like “AAAAAAH the panacea.”

The EdgeFiles have been the best files I have used so that is why I am so excited about them.