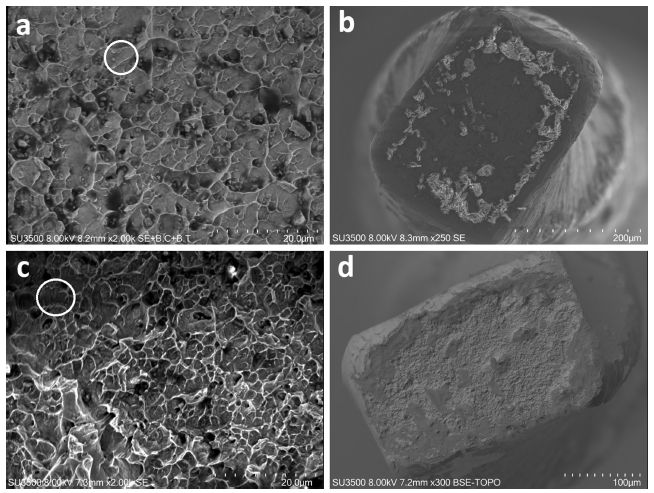 Background: Aim of this study is to investigate the cyclic fatigue resistance of the Gold treated WaveOne Gold and the Firewire treated EdgeOne Fire instruments. The null hypotesis was that there were no differences between the lifespan of Gold treated and FireWire treated instruments when subjected to cyclic fatigue tests.
Material and Methods: 40 new NiTi instruments with a length of 25 mm were tested: 20 Wave One Gold Medium (WOG), tip size 35 and variable taper (Dentsply Maillefer, Ballaigues, Switzerland) and 20 Edge One Fire (EOF) (EdgeEndo, Albuquerque, New Mexico) tip size 35 and the same variable taper. A mobile support for the electrichandpiece and a stainless-steel block containing the artificial canals were used. The same artificial root canal witha 90 degrees angle of curvature and 2 mm radius of curvature was used for all the tested instruments and the WOG counter-clock wise reciprocating motion with an engaging angle of 150° and a disengaging angle of 30° at 300 rpm, was selected for the test. All instruments were inserted at the same length (18mm) and then rotated in the same reciprocating motion until fracture occurred: the time was stopped as soon as the fracture was visible and video-re- corded with a 1/100 sec chronometer. Differences among groups were statistically evaluated with an analysis ofvariance test ANOVA (significance level was set at p<0.05).